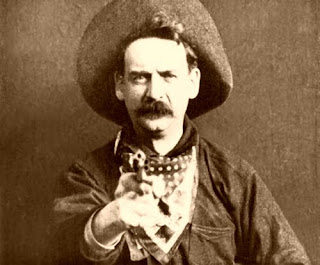 Do you like the video games, with the noises and lights and the video stick and the red button you push and the monsters and ghosts and the cha cha cha? I don't understand them because I am an old man with a lot of physical and mental problems. New experiences frighten and upset me! I'm like the people who screamed and fainted during THE GREAT TRAIN ROBBERY (1903) when the guy (spoiler alert!) shot his gun right at the audience. But I will read EXTRA LIVES, the new book by "Blog" Buddy Tom Bissell, which gets a great review in the New York Times. I didn't know anything about Uzbekistan either, before I read Tom's masterpiece CHASING THE SEA. Trust Tom Bissell, people! Put yourself in his hands. The whole Bissell thing is that you start by saying, "Now, why would I care about _____?" And then at the end you are like, "Thanks to Tom Bissell, I care very much about ______!" Besides, the "blog" feels proprietary about EXTRA LIVES, having "published" an early reflection on the video game Marvel Ultimate Alliance by Mr. Bissell. Still, I have to admit that for me the video game book will be but a mere (though surely delectable!) sorbet to tide me over until his book about the burial places of the twelve apostles comes out (from the writing of which - ironically? - I think Mr. Bissell was playing hooky in his Roman quarters as he indulged in Marvel Ultimate Alliance!). I read in an interview that he has 1,500 pages of the apostle book, and I guess the implication is that he's in the process of whittling it down, to which I reply: DON'T! I'm in training with CHRISTIANITY: THE FIRST THREE THOUSAND YEARS, and it's just warming me up, so I can take whatever you dish out, Tom Bissell!
Posted by Jack Pendarvis at 5:53 AM