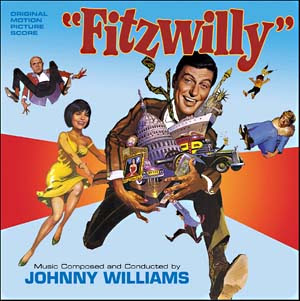 This is simply too rife with portent to ignore. Jeff McNeil writes in to mock me - or so I thought! - by pretending that there is a CD soundtrack to Fitzwilly AND The Long Goodbye. You heard me, Fitzwilly and The Long Goodbye, together in a single package! Now you have to understand, McNeil has long mocked my affection for the former film and has recently scoffed at the latter, sight unseen, as "looking like it would be horrible," merely to "get my goat." But here's the thing: McNeil was not mocking! There really IS a single CD featuring Fitzwilly/The Long Goodbye. Strange and portentous, as I say. Note that the Fitzwilly score was composed by "Johnny Williams." More strangeness afoot: The last time I viewed "blog" favorite BACHELOR FLAT, I noticed that the score was composed by "Johnny Williams," and wondered aloud if he was the same person who would later become very dignified or something and change his name to "John." Yes, apparently! Finally, a word about his score to "The Long Goodbye." It's absolutely masterful, a constant reworking of a single theme... perhaps inspired by the similar compositional gambit used by David Raskin in LAURA (1944), which happens to be Theresa's FAVORITE MOVIE OF ALL TIME! See how everything ties together in the strange world of "blogging"? It's strange! Strange, I tell you! I was going to call this "post" "The Long Fitzwilly," a crass impulse more appropriate to panto.
Posted by Jack Pendarvis at 8:24 AM