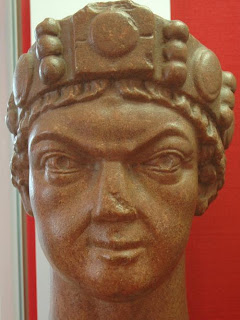 The four Harry W. Schwartz bookstores in Milwaukee, Wisconsin, are going out of business. That's a family-owned chain of independent shops, down the drain. I found the news on the "blog" of Justin Riley, one of the bookstore workers, now unemployed. This is the time to reveal, I suppose, that Justin is the person sometimes referred to here as "Comic Book Villain." I can't properly express how nice the people at Harry W. Schwartz have been to me. I've been to Milwaukee only once, many years before any of my books came out. It was 1992, and I was with Kelly Hogan and our friend from Hubcap City, and if memory serves it was the night the stage fell down at the old theatre and people were rushed to the hospital. But Justin Riley and company didn't know that. Why would they? Justin was probably six years old at the time. But Harry W. Schwartz was there. I guess it has been there for over eighty years. The point is Justin and his fellow employees didn't know me from Adam, but they were always supportive, going out of their way to sell my books to unsuspecting suckers. Seriously, they always gave me the kind of personal support and encouragement that no mammoth retailer will ever give. Did you know, for example, that over on the unnamed behemoth, my recent novel is currently described as being about how the Emperor Justinian "failed to make peace with Persia in the east by not emphasizing a common interest of trade; he failed to establish good relations with the kings of the western Mediterranean and to develop his own homeland, the Balkans; finally, by banning certain Christian sects, he alienated some border regions and sowed the seeds of rebellion"? Guess what? That's not even close to what my novel is about. (The erroneous description has been up there for months.) And that's just one of the many laughable adventures I've had with the behemoth over the years. Harry W. Schwartz didn't make those kinds of mistakes. See, they read the books with their own eyes and sold them with their own hands. Justin Riley quotes the late owner on his "blog" entry: "The true profit in bookselling is the social profit; the bottom line, the measure of the impact of the bookshop on the community." (Pictured, the Emperor Justinian, as a symbol of what's wrong with, well, everything.)
Posted by Jack Pendarvis at 3:11 PM