Let's Hear It For the Incredible Shrinking Man 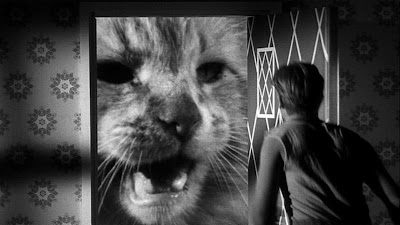 Just watched THE INCREDIBLE SHRINKING MAN. It was great! And the ending - spoiler alert - was mystical, no kidding! DON'T READ THIS UNTIL YOU SEE THE MOVIE. I don't want to ruin it for you. But here's the thing guaranteed to blow your mind. The climax occurs when the hero concludes that "the unbelievably small and the unbelievably vast eventually meet like the closing of a gigantic circle." And then he becomes - I'm not kidding, this is a huge spoiler alert - "nothing"! Yet he "still exists." Mystical, like I said. That's some kind of crazy Nicolas of Cusa stuff they're laying down, you know what I mean? And it connects with some observations on bigness and smallness in the fiction of Flann O'Brien and myself (ha ha! I mentioned myself and Flann O'Brien in the same sentence... again!) that I have "blogged" about before. I was thinking about THE INCREDIBLE SHRINKING MAN because there was a short clip of it on the TV show MONK the other night... and a few days later I noticed a thoughtful, perceptive essay about the film on the TCM movie "blog." So I decided to rent it. I hadn't seen it since childhood, but I still remembered the scene with the spider looming over the poor guy, who's defending himself with a pin. The script is great, the direction is great, the production design and sound effects are great, the movie is suspenseful, unpredictable in its moods and motives, ingeniously constructed, and even moving. Speaking of the direction, it made me ashamed of the "blog's" formerly dismissive attitude toward Jack Arnold. So what if he made A GLOBAL AFFAIR and some other strictly workmanlike pieces? I'll never smirk at Jack Arnold again. He also directed CREATURE FROM THE BLACK LAGOON, one of my favorite monster movies. I'm sorry I ever doubted you, ghost of Jack Arnold! Maybe in the future I'll keep my big gob shut.
Posted by Jack Pendarvis at 3:22 PM