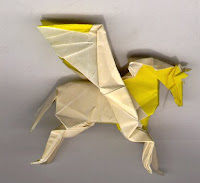 Been thinking about those winged steeds I mentioned yesterday. I wondered what to call them. Pegasus is the proper name for one particular winged steed, you know. But is there a word for them as a group? Like if you saw a bunch of them hanging out together? That's what I wondered. Then I wondered if Pegasus was the only winged steed. You know, so there would be no need to come up with a more general word. I dug out the old OXFORD CLASSICAL DICTIONARY. I knew it would come in handy some day! But it didn't. Well, I did learn (which I should have already known) that Pegasus was "born from Medusa's severed neck." And that made me think again that he might be unique and alone in the world... but then who was pulling the chariot of the sun? Just some regular flying horses with no wings? Magic horses? Probably some crazy magic flying golden horses of purest shining flame. I was too tired to look it up. On wikipedia (so it may or may not be true) they tell us that Pegasus can be spelled with a lower-case p to denote any old winged horse, and that winged horses are also called pterippi (plural for pterippus). Anyway, near Pegasus in the OXFORD CLASSICAL DICTIONARY there was an entry on Pelagius and I read about him and he seemed like a pretty nice guy, so the day wasn't a total loss. Also, I have my oatmeal discussion to look forward to.
Posted by Jack Pendarvis at 12:39 PM