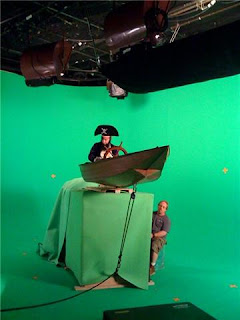 Remember when Mark Osborne (nominated for an Oscar yesterday) sent us a picture of Harrison Ford's back? Well, here's another shot from his camera phone. You won't find this exclusive "show biz" photo anywhere else on the "internet," folks, NOR this exclusive commentary from Oscar-nominated director Mark Osborne himself: "Here's Patchy the Pirate on green screen from the shoot for the 10th anniversary Spongebob special episode to air in November. He'll be going over a waterfall in that boat. And to my disappointment that other man forgot his skintight green outfit."
Posted by Jack Pendarvis at 7:52 AM