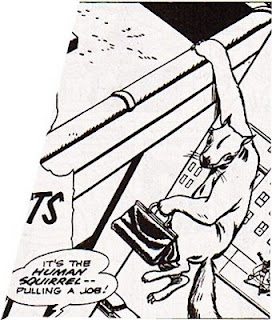 I don't mean to brag, but I saved a moth from one of the cats today. And then I thought, "Hey, I could start a short story with an old man saving a moth from a cat." A few hours later I resumed my reading of UNDER THE VOLCANO and came IMMEDIATELY on a scene in which the main character is trying to save an unspecified flying insect from a cat ("In this preposterous fashion, the Consul stooping, the cat dancing just out of reach, the insect still flying furiously in the cat's mouth, he approached his porch"), but it ends up escaping on its own: "the insect, whose wings had never ceased to beat, suddenly and marvellously flew out, as might indeed the human soul from the jaws of death..." And my helpful inner voice said to me, "See? Somebody beat you to it, big shot. Give up already, you cheap punk." And I was like, "Thanks, inner voice! I will!" (Please note that the illustration does not match the text! I was looking for a picture of the old-time Batman villain "Killer Moth" when I came across this jaunty fellow instead. Via the Absorbascon, natch!)
Posted by Jack Pendarvis at 10:43 AM