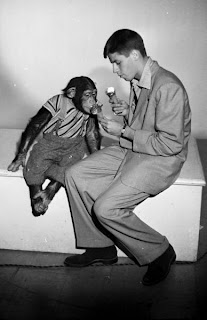 Welcome to Facebook Matters, our brand new spin-off of our grotesquely unpopular literary column, "Literary Matters." Today we have four Facebook Matters. 1) I see on Facebook that "Blog" Buddy Verdell has a friend named Billy Swagger. Billy Swagger is the coolest name ever, with the possible exception of Big Bill France. In any case, it is miles beyond Johnny Click. No offense, Johnny Click! The next three Facebook Matters have to do with monkeys (and/or chimpanzees, which I realize are not really monkeys but I don't care). Three out of four ain't bad! 2) Kimb Osborne sent me a picture of a little monkey in a cowboy outfit riding a dog. "I think this just might be perfection," she wrote in the accompanying note. "Where is it, then?" you ask. Well, that's complicated. The picture gave me many feelings, some of which were of the sad kind that we pretend don't exist here at the "blog." Not that I was upset in the way that those people are who don't want hilarious chimps in your TV commercials anymore. I was more sad in the way I got after thinking for a long time about those monkeys who control robot arms with their thoughts. The cowboy monkey had a sullen look on his face and the dog appeared to be sort of hysterical, or that was my interpretation, which probably says more about me than it does about the dog or the monkey! But Kimb is right, the picture is perfection, forcing us to confront the warring halves within us, hilarious and terrifying, a perfectly dialectical image. 3) Laura Lippman has grudgingly agreed to be my Facebook friend even though my profile picture is a chimp feeding a baby (see? Why doesn't that bother me? Dialectical!) and we all know how she feels about chimps. This gives me hope and makes me decide I was wrong about Facebook and it is the greatest thing ever, bringing people together. 4) Remember this picture of Jerry Lewis and his chimp buddy sharing a delicious ice cream cone? I am proud to say that somebody found it on my "blog" and made it his Facebook profile picture. Maybe he did it by "stealing bandwidth"! If so, it only serves me right.
Posted by Jack Pendarvis at 8:52 AM