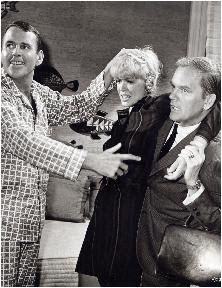 Every day I learn something surprising from the Paul Lynde "web" site, or, as I call it, "my new Bible." Today as I "clicked" around on it, I found a "link" to Woody Woodbury's "web" site. And that was what I learned: that Woody Woodbury has a "web" site. (You may remember Mr. Woodbury from previous "blog" entries, but I bet you don't, because you have a lot on your mind these days.) For Kelly Hogan, who is a well known FRASIER fan: Did you know that Woodbury is friends with Kelsey Grammer? It's true! And if you don't believe me, simply check out the Woody Woodbury "web" site. For McNeil, who loves audio clips: Explore Woody Woodbury's extensive file. Truly there is something for everyone on the Woody Woodbury "web" site. Pictured, Woody Woodbury with Ellen Burnstyn (!!!) and Paul Lynde in a scene from FOR THOSE WHO THINK YOUNG. And yes, I believe the three parenthetical exclamation points are entirely justified. Now if you will excuse me, I am off to look for other subjects that no one cares about but me - and sometimes not even me - so I can announce them to the world through the auspices of my "blog." (NOTE: You can contact Mr. Woodbury through his "web" site, which was how the curator of the Paul Lynde site personally received a photo of Mr. Woodbury with gangster-movie icon George Raft. There. That timely George Raft reference should finally seal my bond with my hip young readership.)
Posted by Jack Pendarvis at 8:15 AM