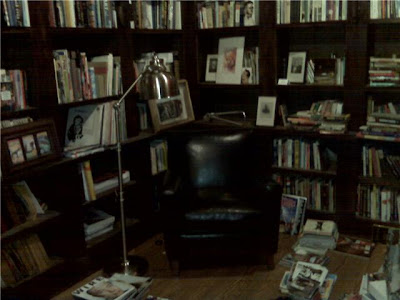 As readers of the "blog" are aware, McNeil is perhaps the world's foremost analyzer of and commentator upon photographs of or about Phil Oppenheim. Yesterday, in a telephone conversation, McNeil remarked on his pleasure at viewing a picture of Phil's office recently displayed on the "blog." When reminded that the photo showed Phil's office as it appeared a number of years ago, McNeil expressed a desire to see Phil's office in its current state. This desire was relayed at once to Phil Oppenheim, via messenger. Phil replied that he has just moved into a new office, which is as yet fairly barren. He wondered if McNeil might like to see his home office instead. Without consulting McNeil, the "blog's" editorial board was able to assure Phil that nothing would please McNeil more. Phil then obliged with several pictures of his home office and one of his bedside table... enough pictures to allow McNeil to fashion a homemade calendar, it occurs to me. Here's one of them. It should keep McNeil occupied with his magnifying glass for a while. After sufficient time for McNeilian contemplation, another of the series will be issued.
Posted by Jack Pendarvis at 8:23 AM