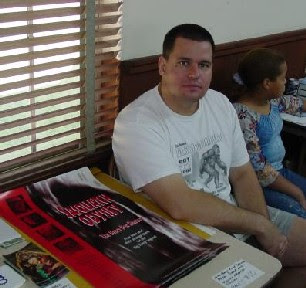 I decided to do one of my patented "Google Image Searches" to see if the man called a "Jerry Lewis look-alike" by a reporter in the previous "post" indeed looks like Jerry. He does not. I found a picture of him at this account ("click" here) of a Texas Bigfoot Conference from a few years back. The reporter whose description is quoted above was seemingly trying to be hurtful, or at least reductive, but I find no insult to either man in the designation. Jerry Lewis and this man are both fine looking in their own ways but do not resemble one another at all. My favorite Bigfoot expert on the "link" may be Mr. Coleman, who is known for his theories about what the "blog" will call (with its well known prudishness) the "dating habits" of Bigfoot. As the article says, "Coleman covered cryptozoology in general. He discussed Mothmen, Lizardmen, and the Chupacabras. Coleman also made an interesting prediction: with the 50th anniversary of the release of the film, The Creature of the Black Lagoon, he told the crowd to expect reports of 'gill men' of the type found in the film." Now, speaking of lookalikes of "blog" heroes, I finally saw that new Metal Men series of stories recommended to me so long ago by the "blog" penpal who calls himself "Comic Book Villain." Being an old man, I do not fully understand your modern day comic books, jam packed as each panel is with bewildering visual information, and dense as each plot seems to be with alternate universes and timelines and mythologies of which I am entirely unaware. But that is not the Metal Men's fault! It was nice to see them in action again. Nor was it the fault of the author. It is my own fault for becoming so old. The comic's target audience of youngsters made its Bob Hope reference all the more gratifying. Mercury (the red one, below) shares Bob's famous ski-slope nose, a similarity made explicit in one of the new stories when Doc Magnus is rebuilding his robots and Mercury asks to be given "the piercing blue eyes of Bob Hope." These are the things that make us happy as we become old and weak. (The panel below is not from the new incarnation. It is one from my youth, as you can tell from the uncluttered style and the weirdly innocent creepiness.) 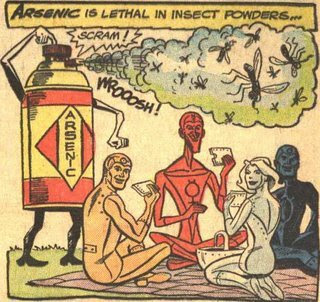 Posted by Jack Pendarvis at 9:22 AM