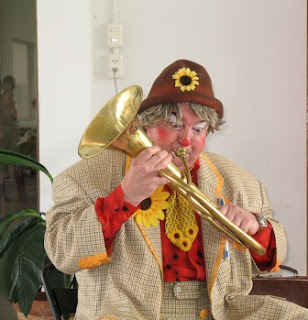 From deep undercover comes a secret message from our corporate spy "L." after a long and mysterious silence. She was coaxed into the open by our recent mention of the guys who tried to write the world's least popular song. She heard about it on the same program as the NBIL. "I have been exploring all kinds of online radio shows in an effort to keep my headphones on to drown out the sound of my objectionable coworkers," she writes. As an example, she cites a coworker who blew his nose all day yesterday. "And I kid you not," she insists, "that his nose blowings were like clown joke nose blowings... I had to get on the phone with the corporate office in California, so I found myself in the odd situation of having to ask him to stop blowing his nose." This gentleman also made some loud and startling noises from places other than his nose, noises and places upon which no decent "blog" might bring itself to report.
Posted by Jack Pendarvis at 12:31 PM