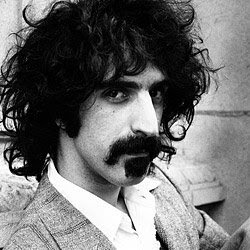 The NBIL was listening to NPR yesterday when he heard something he was sorry he hadn't heard a month before - because, he said, it would have been perfect for the "blog" advent calendar. And he was right! He heard about these guys who used scientific polling to compose what should be the most popular song in the world and the least popular song in the world. Of the latter, they say on their "web" site, "The most unwanted orchestra was determined to be large, and features the accordion and bagpipe (which tie at 13% as the most unwanted instrument), banjo, flute, tuba, harp, organ, synthesizer... An operatic soprano raps and sings atonal music, advertising jingles, political slogans, and 'elevator' music, and a children's choir sings jingles and holiday songs." They might have saved themselves some time and just put on a Frank Zappa record. By the way, as you can tell from the great number of "links" above, we have often "blogged" about many of these musical components with tender love. We stand up for atonal music, rap, accordions, and opera, just to name a few! And the NBIL feels the same way. Further research led the NBIL to discover that these gentlemen are also responsible for the most and least popular paintings in America. The most popular, as the NBIL noted, features George Washington [that's not it attached to this "post" - ed.]. Nor was the NBIL the only person who talked to me about George Washington yesterday. My mother (who loves George Washington and thinks he is handsome) claimed that the largest collection of George Washington memorabilia outside of D.C. is located in Columbiana, Alabama. Sure enough, there is a Washington museum in Columbiana. As a frequent critic (and perpetrator) of the "internet's" inaccuracies, I cannot say whether it indeed holds the second largest collection of Washingtonian materials, but I CAN say that my mother is not a liar! Here's a fun activity! Count how many times in a week someone mentions George Washington to you. Maybe it happens more often than you think! Keep a journal! Share your findings with others! Start a George Washington club in your neighborhood!
Posted by Jack Pendarvis at 11:01 AM