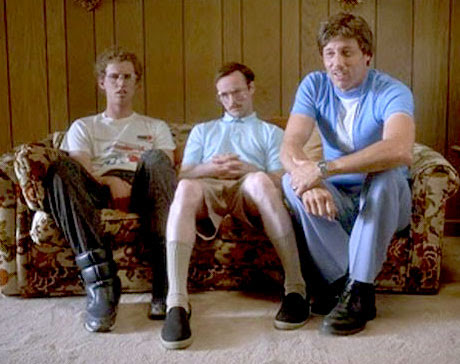 Dear Dr. "M.," Your "post" on last night's episode of LOST excites our brains with thoughts, points, and counterpoints, five of them, to be precise. We would have appended these to your "post," but given our trouble with paragraph breaks, the results would have been unsightly and perhaps unreadable. Our five responses follow: 1) Yes, Theresa also mentioned PSYCHO during the scene to which you refer. Then, as ******* began to ******* ******* the ****, she switched her frame of reference to EVIL DEAD II. By the way, I swore that I saw ****** in that scene while Theresa vowed otherwise. Thank you for validating me through freeze-frame technology. 2) Who is this Carlton Cuse you mention? One of the creators of LOST, we take it? 3) The Samantha Mathis film of which you are thinking is PUMP UP THE VOLUME. I mentioned the very same film to Theresa last night when Ms. Mathis appeared on the screen. She also played Julie "Marge Simpson" Kavner's daughter in a movie. I can't recall the film's title, but it was about a woman and her dreams of being a standup comedian and it was not PUNCHLINE starring Sally Field and Tom Hanks. 4) Here in the Pendarvis Building, we recognized Ben's father not from CHINA BEACH, but rather as Uncle Rico from NAPOLEON DYNAMITE. Now we can say that the two shows you write about most often for the "blog" - LOST and VERONICA MARS - share cast members with NAPOLEON DYNAMITE. The character "Mac" from MARS is played by Napoleon Dynamite's love interest in his eponymous film. 5) I compare the acting styles of Terry "John Locke" O'Quinn and Dick "Gold Diggers of 1933" Powell in the current issue of the Oxford American.
Posted by Jack Pendarvis at 12:41 PM