The Feature Formerly Known As "The FBIL's Annotation Korner" 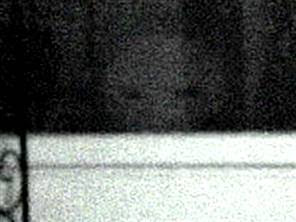 Welcome once more dear friends to the Feature Formerly Known as "The FBIL's Annotation Korner." Today, the NBIL, in response to the "blog's" recent focus on "dance crazes," alerts us to a current "dance craze" called "the Fishstick," which is, as the NBIL puts it, "apparently all the rage with the youtube crowd right now." The NBIL provides examples (here and here). Its currency would explain why I know nothing about it. For example, I was talking to McNeil the other day and he started going on about "that space alien picture, you know, the guy who says he took a picture of a space alien that was peeking in his window." I said, "I should put that on the 'blog." "Nah, everybody knows about it already," McNeil replied. "I don't know about it," I said. "It's ALL OVER THE INTERNET!" McNeil bellowed. (Pictured, the hazy photograph in question.) The NBIL concludes by saying, "Incidentally, 'Tighten Up' (the song of choice for Fishstickers) always makes me think of Homer Simpson and his one man band." This brings up another important subject. Remember how I was whining because nobody gets my clever Paul Harvey and "The Rest of the Story" references? Well, I was watching a "Simpsons" rerun last night in which Grandpa Simpson was listening to the radio. Paul Harvey (voiced by Harry Shearer) said, "And that little boy who nobody liked grew up to be... Roy Cohn. And now you know... THE REST OF THE STORY." It made me happy. But here is the sad part. Kent Osborne and I have a trick by which we know that our phone conversations have gone on too long and it is time to hang up. It's when we start quoting "Simpsons" lines back and forth to one another. Well, in the past few days, I've just started doing the very same thing on the "blog." Does it mean that OUR long one-sided conversation is almost over? Is it the death knell of the "blog"? Also, what is a "knell"?
Posted by Jack Pendarvis at 12:36 PM