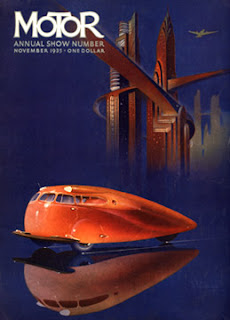 "Click" here for a story about a crazy car. Jerry Lewis is not mentioned in this New York Times story for some reason, though if you ask me there is ample opportunity, considering how crazy he could get when he drove a car. See THE DISORDERLY ORDERLY, for example. Jerry would have looked great driving a Dymaxion (pictured) - great and hilarious! - especially given the tendency of the Dymaxion's rear wheel to lift from the ground at high speeds and the fact that it had a periscope instead of a rearview mirror. Come on! This car was made for Jerry! A periscope! Periscope + Jerry = solid gold. I like the part of the story when Buckminster Fuller (who dreamed up the car) is described physically. The description's placement, so far down there near the end, makes it strangely awkward and charming, as do the chosen particulars and their bracing irrelevance to the story: "Fuller, a short man who often wore a white suit..." Somehow I place this in a category of satisfaction with the quotations from Jesse James, Jr. and James Joyce to which I have recently drawn your attention. I hope the New York Times will not move OR remove the fragment ("Fuller, a short man who often wore a white suit") like the time they betrayed me by switching out the headline about monkeys. 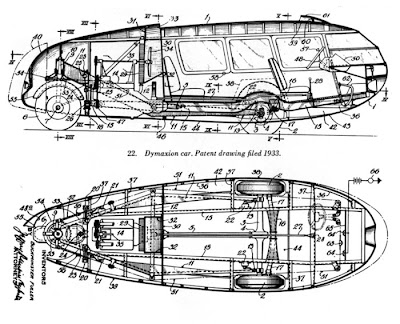 Posted by Jack Pendarvis at 3:34 PM