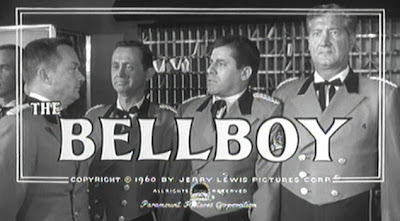 I watched THE BELLBOY yesterday. This time I was struck by one scene above all others. In that scene, Jerry Lewis plays himself. Shawn Levy describes the scene in his book KING OF COMEDY: THE LIFE AND ART OF JERRY LEWIS, so I will take the shortcut of using his words here: "The star arrives in a limousine escorted by a cadre of motorcycle cops. He is accompanied by an entourage of twenty-seven sycophants, all of whom emerge from the limo before him. His handlers brush off his clothing so much they rumple him; when he starts to smoke, so many lighters snap open in front of his face that his cigarette is crushed; when he tells the hotel manager he isn't feeling well because of a death in the family, the entourage breaks out in phony laughter." What struck me yesterday was the remarkable continuity between that scene and Jerry's portrait of celebrity more than 20 years later in THE KING OF COMEDY (the Scorsese movie, not to be confused with Levy's similarly titled book, which is absolutely essential and very tough on its subject, yet fair, thoughtful, and appreciative), especially - but not limited to - the plea for release he improvises in character to his captors. I sat down to "blog" about this four or five times yesterday, but each time weariness overcame me, yoked with the thought, you know, "Who cares?" But then I remembered the wise words of Chuang Tzu. Let me refresh your memory if you are too tired to "click": Chuang Tzu and a pal of his are talking about the uselessness of a big old gnarled tree and Chuang Tzu is like, "What does not invite the axe/ No creature will harm/ What cannot be used/ No troubles will befall." And I was like, "Yeah." So, in other words, now I'm "blogging" BECAUSE it doesn't matter and no one cares. Which gives me the strength to add that in his film (sic) ANTICIPATION, Godard had Anna Karina quote one of the last lines from THE BELLBOY. Also that the opening narration of THE BELLBOY is spoken by object of mild "blog" curiosity Walter Winchell. And now you know... THE REST OF THE STORY. This is Paul Harvey........... Good day!
Posted by Jack Pendarvis at 11:58 AM