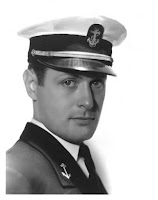 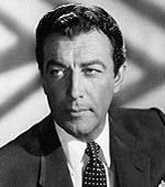 Welcome to the latest edition of "McNeil's Movie Korner." McNeil was watching LADY IN THE LAKE on his dvr the other day. At precisely 28 minutes into the recording, Robert Montgomery knocked on an apartment door - a door bearing the number 28! During LADY IN THE LAKE, McNeil's wife, the art historian, called him from Greece, where she had just purchased an icon of St. Nicholas. When McNeil resumed watching LADY IN THE LAKE, a character mentioned, by that very name, St. Nicholas! These sorts of coincidences form the lubricant that makes the useless engine of the "blog" run so cleanly and efficiently! Yet our story ends in tragedy. While praising the dialogue in LADY IN THE LAKE, McNeil had to throw a little jab at Robert Montgomery: "He's no Robert Taylor," said McNeil. Well, you can imagine how my blood began to boil at those words! I do not care for Robert Taylor. There, I said it! I think of him as a dead mackerel. In fact, I would say that Robert Taylor (right) is no Robert Montgomery (left)! Despite his ropy personal politics, Robert Montgomery is one of my "fave" actors and directors. (For more on the conundrum of politics vs. art as it relates to another "fave" Bob, "click" here. And then there's Charlton Heston.) In fact, Eli Horowitz very gingerly and politely coaxed me into excising a long passage about Robert Montgomery from an e-book I did for McSweeney's. Now, to give McNeil his due, he has an ally in Jeanine Basinger, whose book THE STAR MACHINE is my second Bible, and from which I sadly quote: "Today, however, audiences find [Montgomery] cold. There is about him a distinct edge of disdain. His projection of smug superiority, meant to be amusing, climbs down off the screen and irritates a modern audience. He's slumming. This quality was right for his times, but now he denies the audience entrance." All right, all right, we get it! If you wanted to break my heart, Jeanine Basinger, mission accomplished! You know, this makes me think of the great debate McNeil and I once had entitled "Jim Hutton vs. Dean Jones." I look forward to an email from McNeil, in which he explains what is so great about Robert Taylor.
Posted by Jack Pendarvis at 1:04 PM