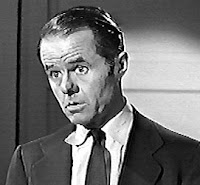 Remember "blog fan" (as unlikely as that sounds) James Sepsey? He's best known as the guy who once encountered Ruth Buzzi. The "blog" received another note from Mr. Sepsey, which included the following lines: "Supposedly Billy Mumy used to live in Bishop, California, which is where I grew up. Hauntingly enough, there is a Mumy Lane in Bishop. And an old creepy house that, once again supposedly, belonged to the Mumy family." But my interest in Mr. Sepsey's note lay not in Mumy rumors (Mumy was the kid on LOST IN SPACE, in case you don't know) but in Mr. Sepsey's offhand comment, later in the text, that the great character actor Elisha Cook, Jr. (pictured) also lived in Bishop, California, and that Sepsey had encountered him on more than one occasion. I asked for details, and I got them. I present them now, edited somewhat - not for content (they were excellently written) but for clarity's sake, because I still don't know how to do paragraph breaks. And now, we turn it over to Sepsey, who was fifteen at the time of this memory, working in his grandfather's hardware store: "One afternoon a man pulls up in a dilapidated Cadillac. Dogs bark in the backseat. Many dogs. Through the storefront window my coworker and I can see the man. His Cadillac. His many dogs. My coworker, who is thirty years my senior, says, 'Hey, that’s Cookie.' I have no idea who Cookie is... 'Shaddup!' Cookie hollers at the dogs. 'Shaddup all of you!' Cookie enters the store. Without a shirt on. He is scrawny and leathery, with springy white hair and sparkly eyes that soak you up... we point Cookie to the motor oil. He says he’ll be right back. My coworker begins to explain who this Cookie guy is. He is Elisha Cook, Jr., the great actor, and he has been killed in many big movies. Killed. Roughed-up. Double-crossed. Poisoned... And usually before the second act! He has starred with many legendary actors and actresses: Humphrey Bogart, Peter Lorre, Lauren Bacall, Laurel and Hardy, Alan Ladd, Shemp Howard, Vincent Price... Cookie gets his motor oil and comes back to the counter. He talks to my coworker. They act like old friends. Old cellmates. Then Cookie says something to me. Something like: 'Take care, fella.' ... Not long after that first encounter with Cookie, I see him on The Bionic Woman. 'Hey,' I say to my dad, 'that’s Cookie. He bought motor oil from us a while ago.' 'Shoot,' my dad says, 'that’s nothing. One time I was going up to Coyote, and here’s old Cookie stuck in a ditch, on a switchback. So I stop, help him get his truck unstuck. He says thanks and gives me a beer. Next thing we’re on his tailgate finishing a twelve-pack. And probably a little whiskey, a few nips. When we get done, heck, we’re both too darn lit up to drive. But we do anyway. Cookie says, "Thanks, fella." And then drives away.'"
Posted by Jack Pendarvis at 2:53 PM