The Autobiography of Charlton Heston 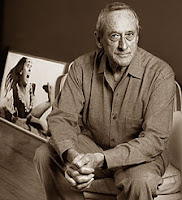 I was "flipping around" last night when I came upon a broadcast of MY DINNER WITH ANDRE. It was on a channel of which I had been unaware until that moment, possibly because of we only recently converted to "the satellite." The channel was called Ovation. There were commercials during MY DINNER WITH ANDRE, which seemed inappropriate and distasteful somehow, or in any case, out of keeping with the spirit of the movie. But the thing that would have probably made Andre Gregory (pictured) faint was the big ugly "bug" (as we call it in the TV business) advertising the Ovation channel at the bottom right of the screen, obscuring his constantly talking face like a particolored goiter. But I have nothing against commercial television, as I have proven time and time again, and I am taking forever to reach my point! I found myself soothed by the part of the movie I happened to catch: it was Wallace Shawn (of whom I do a pretty fair impression; Theresa often demands it) discussing his immense enjoyment of the autobiography of Charlton Heston! I felt an intriguing calm. It soothed me to think of Mr. Shawn, who seems to be a liberal like myself - a humanist at least! (I do not wish to speak for Wallace Shawn, though I am great at speaking LIKE him at parties) - enjoying the autobiography of Charlton Heston. It made me feel... justified? Connected? Warm? I don't know. Or perhaps there was some wry commentary flying over my head! That is often the case! But I don't think so. The feeling of that moment was sincere, both on my part and (so I felt) Mr. Shawn's. My recent absorption in facts and tales about Jesse James has a similarly calming effect somehow. McNeil called and we were discussing Chapter 2 of the book Jesse James, Jr. wrote about his father. Here is one of the passages we discussed: "Nearly three years after the murder, when I was nine years old, I was in Kansas City with my grandmother. We were walking up Main street. I had had hold of my grandmother's hand. Suddenly I saw and recognized Charlie Ford coming down the street toward us. I knew him the instant I saw him, and I was very much excited. I said to my grandmother: 'Here comes the man who killed my father.'" Now, that is not a soothing subject, but it IS soothing to think of how cleanly things can be expressed, even emotional things. In conclusion, I should admit that though I once paid shameful lip service to Charlton Heston's nemesis Michael Moore, I MUCH prefer the films (though not the politics) of Mr. Heston - to the same degree (as reported previously on the "blog") that I prefer the work of Phyllis Diller to the work of Ayn Rand. So when I said I "liked" Mr. Moore, I am not sure the statement was perfectly accurate. Intellectual agreement is no match for the satisfying feeling in my heart when Charlton Heston blows a hole through a killer zombie!
Posted by Jack Pendarvis at 12:41 PM