My Gleanings For You, the Busy "Blog" Reader 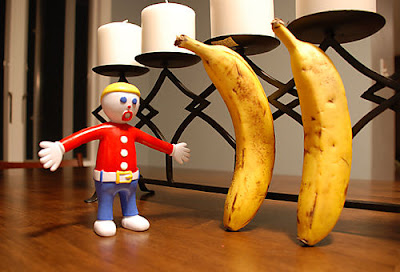 Here's what I recall reading in the New York Times today: something about a recently discovered trove of Weegee photographs (take note, ex-boss Lisa and Hubcap City man!). Also, the creator of Mr. Bill (pictured here in a cheap imitation version with today's theme of "bananas"... although I should note that the "cheap imitation" Mr. Bill appears to be made out of more expensive materials than the real Mr. Bill) seems smart and interesting. Then there was something about a writer who was watching the Super Bowl and a commercial came on and he knew INSTANTLY that "Pepsi Cola" is an anagram for Episcopal and "Britney Spears" is an anagram for Presbyterians. (I am too tired to confirm this.) What else? There was the charming way in which the "internet" version of the Times summed up an article in the Science section, and I quote: "Scientists are beginning to despair of explaining the universe." Finally, there was the usual (and welcome) positive mention of Dean and Jerry by Dave Kehr. No Messiaen today! Although a few days ago, maybe a week, there was an article about some organists who were getting together and jamming out on some Messiaen organ works. The New York Times loves them some Messiaen. I hope you have enjoyed this brief trip into the New York Times. Especially the part about despairing for the universe or whatever.
Posted by Jack Pendarvis at 8:29 AM