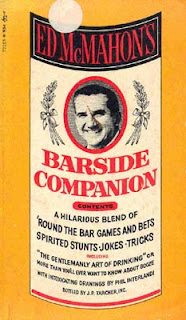 McNeil correctly points out that Godard did not make a film called ANTICIPATION, as previously and erroneously reported on the "blog." It was a segment of one of those omnibus movies by multiple directors so popular in the 60s. The name of the larger film in question was LE PLUS VIEUX METIER DU MONDE, and Godard's contribution was called ANTICIPATION, followed by a long subtitle I'm too tired to cut-and-paste here. The title of this informative "post" is an "inside joke" between myself and McNeil, making oblique reference to Ed McMahon (pictured), about whom we have had several recent conversations. I'm sure everyone will want to know that McNeil and I saw McMahon's magisterial performance as "Charlie Blanchard" in FUN WITH DICK AND JANE (1977) together, during its original theatrical release! We had a lot of time on our hands in those days.
Posted by Jack Pendarvis at 9:48 AM